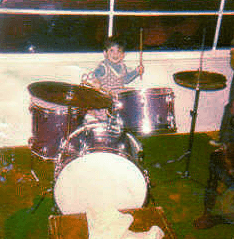 Born in San Jose, California, Joe has been playing the drums since the age of five.  He was first taught at home by his older brother Gino.  He later became active playing in school bands and this is where his first love for jazz began.  He received a scholarship to attend the Stanford Jazz workshop and then became a member of the Alum Rock Jazz Band (1988). At the age 14, Joe began playing professionally around the San Francisco bay area.  He has had the honor of studying with such greats as Louie Bellson, Joe Porcaro, Freddie Grubber, Wally Schnalle, Bryant Mills, Karl Carter, John Ramsay, Rick Considine, Lewis Nash, Kenwood Denard, Mike Mangini and many others.

Since then, Joe has moved back to San Jose. Some accomplishments that he is proud of are playing his debut drum clinic at San Jose Pro Drum opening for drum legend, Tommy Aldridge. Joe has also finished two European tours with Hip-Hop artist, and Kofy Brown. In October of 2008, Joe completed a Japanese tour with Jazz vocalist, Yoshiko Oda. The tour took place all over Japan including the Okazaki Jazz fest.

It was at this time where Joe met and became friends with Jazz-legend, Louie Bellson. The common bonds of their being jazz-drummers and of Italian heritage kept their friendship tight for over ten years. Joe says “Louie was like a second father to me. He taught me so much about music, friendship and life. It was a true blessing to have Louie in my life.”

Joe was also a member of the The Hristo Vitchev Quartet. You can find Joe on CD’s “Song for Messambria” and “The Perperikon Suites.” This group performed at the AT&T San Jose Jazz festival along with The Monterey Jazz festival.

Joe is now the leader of his own Jazz-Fusion group, Joe DeRose and Amici. It was in 2010 that they recorded their debut CD, “Sounds for the Soul”.  They performed their CD release at the prestigious Yoshi’s Jazz club in Oakland and preformed their south bay CD release at The Kuumbwa Jazz Center in Santa Cruz.  This band consists of Hristo Vitchev on guitar, Dan Robbins on Bass, Murray Low on Keys, and Dann Zinn on sax. In 2013, they preformed at The 2013 San Jose Jazz Summer Festival. It was in January of 2014 that Joe DeRose and Amici released their second album “Peace Streets”, which was on the ballot for a Grammy as “Best Instrumental Jazz”. Stay tuned in 2019 for Amici’s third album release! If you never have heard Amici, they are a group of all-star musicians not to be missed!

“Joe De Rose and Amici take old school fusion and move it into the next millennium with Peace Streets. Joe De Rose swings like a beast, a lyrical drummer with the intensity of a Billy Cobham and the deft touch of a Max Roach. The harmonious synergy captured here is mind blowing. I grew up on fusion, this is better. Joe De Rose and Amici get it right. This is as close to perfect as one can get!
—Brent Black (Critical Jazz)